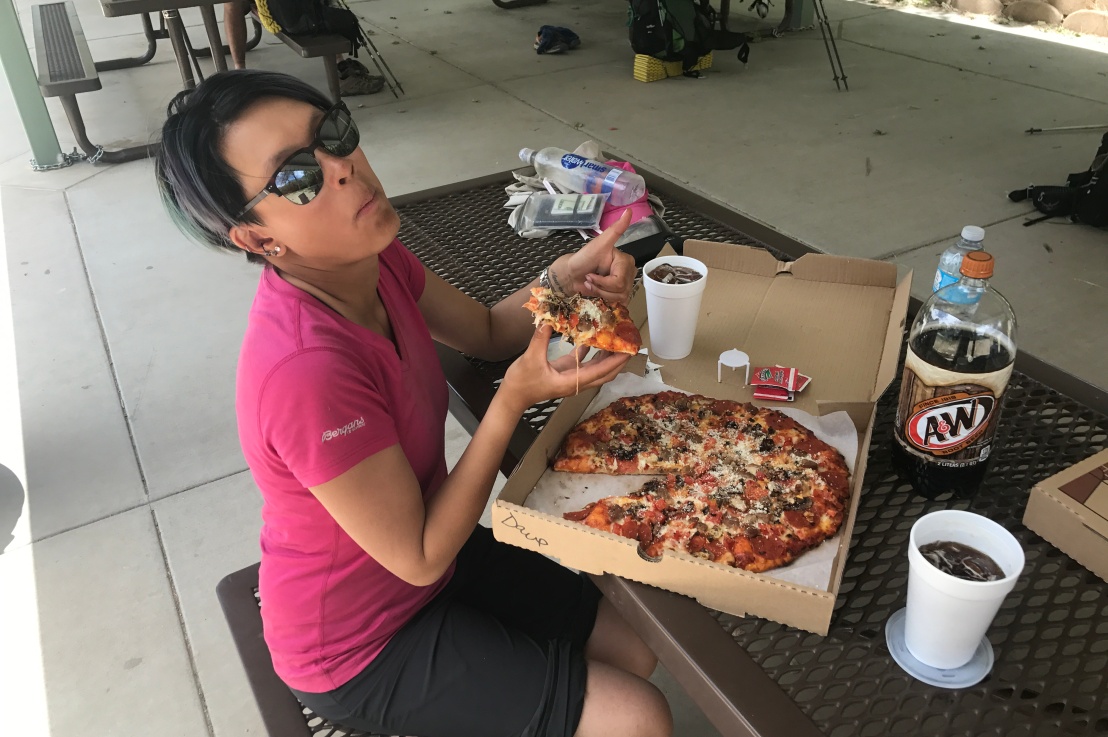 After climbing up from the campsite the night before, my fellow hiker, Quoi, and I made our way toward the Mojave Dam which was a fun spot to stop.  ( Quoi means ‘What’ in French.  She is French/Canadian ) It was built in such a way that it acted like a huge echo chamber.  Any sound would clearly bounce off the walls several times.  We and many fellow hikers had loads of fun with that.  Took a quick break there after seeing a handful of other hikers and moved on to a stream crossing and water.  This is where I was bummed I didn’t have my trekking poles.  Got my feet a little wet from crossing these logs even though I had grabbed a tall stick for it.  Still might have gotten them wet but it would have made me feel better about it. Ha!  Took a food/lunch/nap break next to the stream because the sun had come up and was hot… again.  Current theme, that lasts for a long time.  Got moving when the sun started going down and ran across Coppertone again.  More root beer floats!  Hung out with him while waiting for the sun to go down some more, then did my first night hiking later on.  We were trying to time getting to the next hiker spot during the early afternoon.  Night hiking is a strange thing.  With the headlight you can only see a handful of feet in front of you and never really to the side unless you turn your head.  In fact, during one stretch, Quoi told me to not look to the side.  I obeyed.  Apparently it was quite a straight drop down just off the trail.  Without my poles, I felt a little uneasy at times on the trail where it was angled or slippery.  Now add nighttime hiking.  A challenge at times.

The next hiking spot is a ‘thing’ that hikers try to do.  It’s a picnic area called Cleghorn next to Silverwood Lake that is popular because there is a local pizza place that delivers.  When we arrived one of the hikers had the pizza place on the phone and he passed it around to everyone there to place their order.  It had to be about 5 or 6 orders by the time we were finished.  The driver even picked up soda from the convenience store if requested.

We hiked on into the early evening to get a little closer to Cajon Pass, the very next hiker spot on the trail.  During the next day the wind picked up and we hiked by some amazing views. As always the picture does not do this justice, but here it is anyway. I was so inspired by this view I sent this and/or similar pics to my parents and my re-supply strategist.  I stopped and stared at this for a while.  This is one of the reason’s I am here.

Another reason is to see the off trail sites along the way too.  Which brings me to my next hiker spot.  Quoi had been talking about it for days, and I couldn’t help but admit I was a little excited to.  It’s not as glorious as the last pic, but when you are out here walking the trail and the only food you get ( besides the pizza the day before ) is your hiker food… then this looks amazing!

The McDonald’s at Cajon Pass is a Super popular hiker spot.  It was 2/3 full of ‘hiker trash’ ( a common term of ‘endearment’ doled out by us and others ), at least.  Many of whom we know, and some stay for hours and hours.  When some left more poured in, and we didn’t order light.  Most seem to spend in the neighborhood of $20 per hiker.  Think of that.  Could you order and eat $20 worth of McDonald’s on a normal day?  My $20 included; 3 double cheeseburgers, a large coffee, a large vanilla shake, a large fry, 2 yogurt parfaits, a large Hi-C orange, and a ice cream cone, from what I remember.

After McDonald’s we went next door to the gas station convenient store, grabbed snack food for later, and headed to the Best Western across the highway.  Quoi’s plan was to hike to Wrightwood starting the next day, while I planned on taking a zero day the next day, and get things in order… and a bed sounds great.  My other plan was to go from Cajon Pass and hitch to Wrightwood, which would skip some miles ( just over 20), but that’s where my supply box would be and my trekking poles were sent.   Also I planned a personal ‘penance’ for skipping when I headed back to the trail.  I would take the Acorn Trail, which is a steep climb up and brings me backwards a few miles from Wrightwood, though not all the way back to Cajon Pass.  It would be tough and shave off some of the miles I missed.  For now though, the Best Western called my name, and I answered.

5 thoughts on “Pizza and McDonald’s”