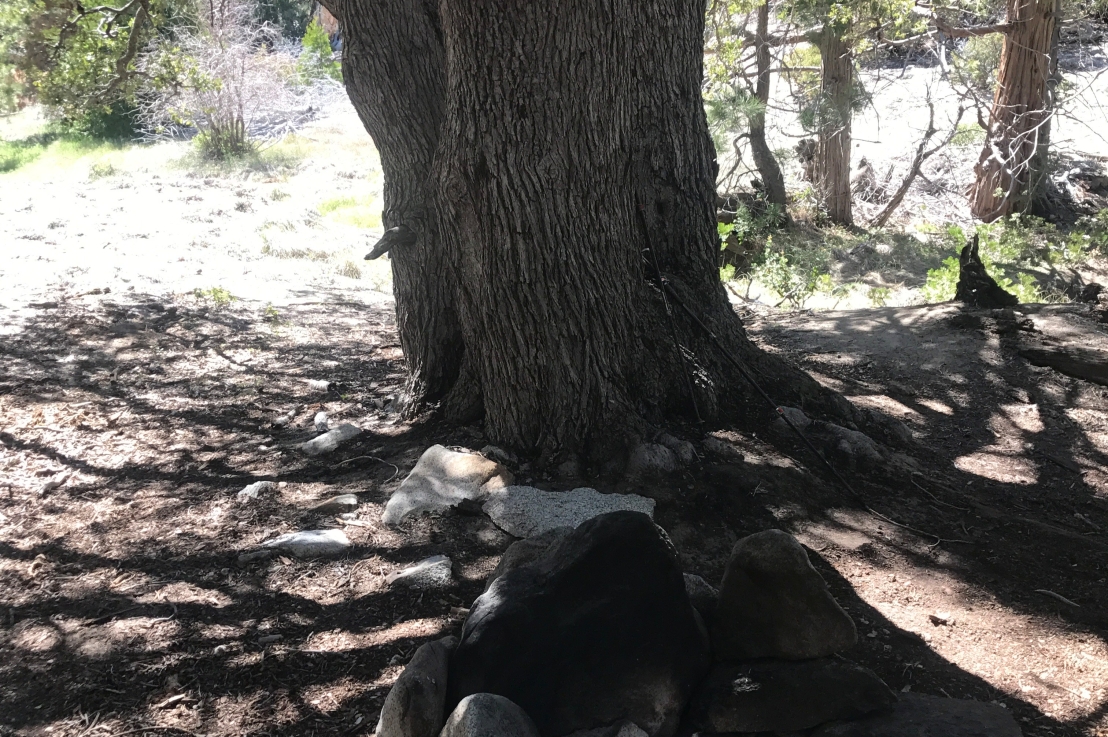 After heading down from Mt. San Jacinto I walked along Fuller’s Ridge until I found a nice secluded spot to camp for the night.  It was right before a small river that still had snow all along the banks.  It wasn’t too tricky getting across the river the next day, there were plenty of rocks to step on and it wasn’t very wide.  After hiking for some miles I followed a side trail to fill up on water.  At this spot was a fire pit and a sign that said ‘PCT Hiker Coliseum’.  Ha!

So I took my lunch there, and ran into a couple of other hikers doing the same.  I then hiked further and ended up camping right next to mile 200!

Next day, I hiked down to what we call(ed) ‘The Faucet’.  It had no shade, and was fairly windy, so I cameled up ( drank lots of water before filling my bottles ) and moved on.  Not 1/2 mile down the trail there was a Trail Angel called Coppertone in the middle of this desert area.  He was serving up root beer floats, fruit, donuts, and such.  I had just left The Faucet but was, easily, convinced to have a root beer float!  I sat and chatted with him for a spell.  Super friendly and interesting guy.  Then it was off toward the I10 underpass.  Along the way was deep sand and high wind coming right at me.   Under the I10 was some more trail magic that was in the form of soda’s, water, and chips.  I grabbed myself some water… can never have too much… took a quick nap and headed on.

The wind never really let up, and as it happens, there was a wind farm set up in this area.  Makes sense.  Luckily, I camped just before it and was able to find shelter from the wind behind a rather large bushy tree.  Next day was an uphill struggle for me.  It seems we are always going up.  When the trail did turn downward for a bit I came upon an oasis.  It’s known as Whitewater Preserve.  There are palm trees, green grass, an old trout pond, a wading pool… and wind… lots and lots of wind.  So much wind that I stayed and chatted with other hikers that were also down there for a while, jumped in the wading pool and left before setting up camp to find a spot further on down the trail less windy.  There was some trail magic there in the form of pancakes, and rumor had it there was some dinner coming later too, but I wanted to move on.  I heard later that it was a smart move.  Some of the hikers that stayed there caught up to me and told me they had to gather some things that had blown away in the night.  I, however, had found another non-windy spot and did not have to look for my things in the morning.

The next section was all uphill, climbing out of Whitewater.  It wasn’t so steep as it was constant.  It was also a burned out section that they had just re-opened this year,and not exactly pretty.   In fact I met a couple South Bounders section hiking here because they wanted to complete this part since they couldn’t complete it on their thru-hike last year.  Camping this night was interesting since there was a bottle neck of hikers.  It was a great water source and a respectable distance from the last one.  I camped away from them, sorta out of the wind next to a huge tree.  By the time I woke, had breakfast and passed the bottle neck, most of the hikers had already moved on.  Still having trouble waking up before dawn and hiking early, but I’m getting there.

4 thoughts on “The Coliseum, and the Wind”