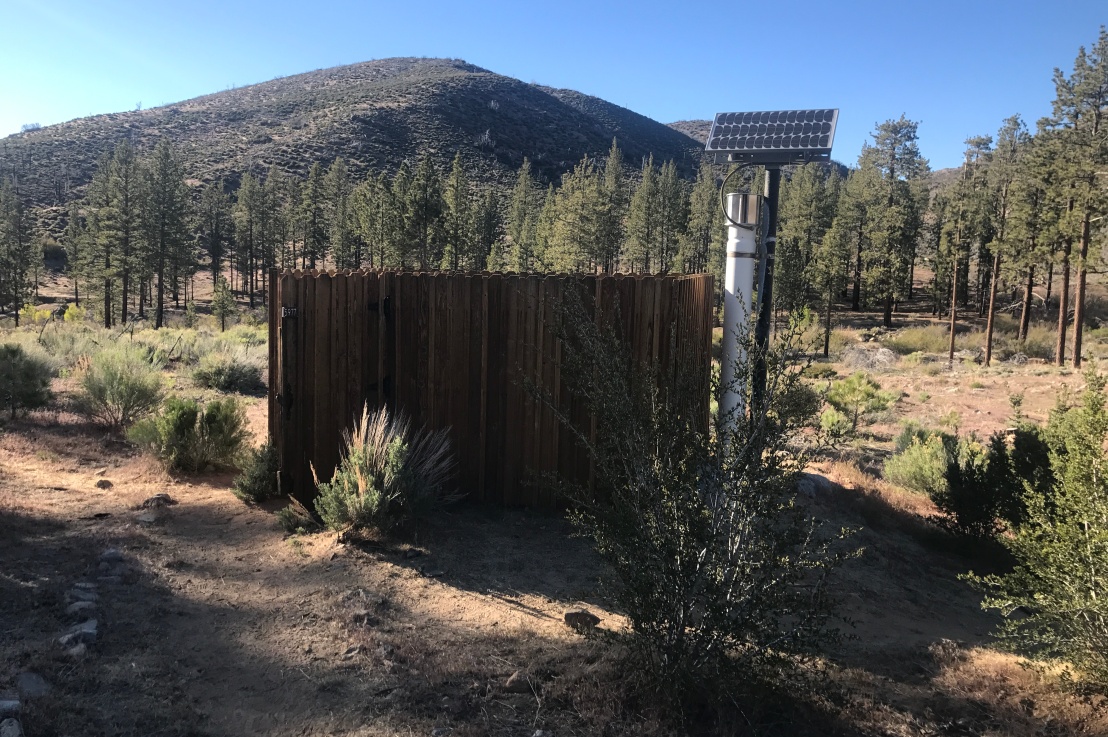 Left Big Bear City’s Motel 6 on a Friday afternoon, but not just any Friday afternoon.  It was the one day of the year they suspend the bus from town to town, so I had to walk to the supermarket the town over to re-supply.  The route was uphill through the suburbs or over a boardwalk next to the busy main street filled with millions ( yes millions ) of mosquitoes. I chose the former, which was pretty awesome, because the side streets were loaded with huge rental lodges made of logs and chainsaw animals.  It made the uphill walking not so bad.  Wait, did I mention why the buses were suspended?  It was the Tour of California Bike Race ( Time trials I think ).  It’s all about good timing out here. Ha!  Only saw a few racers when I cut down to the closed street.  Sad to say it was a little boring, though I’m sure not for the racers and race fans.  Chatted with a couple of hikers later that said they grabbed some wine and watched them go by for a while.  They enjoyed it.

Got all my gear together and sorted my food for the next section.  I was bummed about not having my trekking poles for this section but I figured either I’d grab a stick or deal with it and see how bad it really is.  Turned out to be not so bad, except some small stream crossings, later on, where I got my shoes a little more wet than I’d like.  No biggie. I headed up the trail and a few miles in I got an unexpected ride from a couple who were heading to the trail to day hike.  Saved me a couple mile extra walk.  Started off well and the scenery was amazing as the trail overlooked the the lake I just left.

I pulled up at about 10 miles that day and came upon a funny site.  It was a solar powered outhouse in the middle of nowhere, and since it was late afternoon I decided to stop here for the night.  It was considered a small campsite on the maps.  Little did I know that the solar powered outhouse would be my buddy for this night and all day the next day. Unfortunately while setting up my tent for the night I started feeling a bit queasy.  I ignored it for a bit then realized ‘this is happening’.  And it did.  I lost most of the food I ate that day I think.  That solar powered outhouse became my buddy.  I now had no energy left.  I’m pretty sure I had a touch of food poisoning from the day or night before, but was worried it might have been more.  I spent the whole of the next day eating small bites of my food and drinking water, of which I had plenty of both, thankfully.  I worked on trying to figure out an exit strategy if it became worse, or at the very least didn’t get better.  I slept and relaxed most of the day going from inside my tent to the shade of the trees I was camped around.  I never did feel worse.  The next morning I awoke feeling much better and was able to eat a full meal without trouble.  Time to move on and get some miles done.  Got to a place called Deep Creek with a sandy bottom and sandy beach. Waded in and do you know, sand is a great cleaner of toenail dirt?  While chatting with a day hiker I kept pushing my toes into the sand and sloshing around.  It felt glorious, and my toenails were so clean!  Saw a few hikers I knew and decided to camp here for the night.  A little mosquito-y but overall a nice river to camp next to.

Had a moment of regret while hiking the next day.  Just a moment, mind you.  I stopped for a snack next to a small pool fed by a small stream.  Of course, the trout were jumping at all the flies on the surface.  Why didn’t I bring a little fishing line and some fly’s?  I keep telling myself this is not a fishing trip but a hiking trip.  Right?  I may figure something out further up the trail when I see stream after stream and lake after lake where I could drop a line in.  We’ll see.

When the sun got hotter, I set up a shady area with my tent footprint ( the layer you put underneath the tent for added protection ) as a tarp.  I took a big fat nap and had a proper lunch. Next stop, the clothing optional Deep Creek Hot Springs.  It’s open to the public and apparently a popular spot for locals.  No, I did not take off my clothes.  Yes, there were other’s who had.  Yes, I did get into one of the hot spring pools.  Yes, it was Hot, and it felt great!  No, there are no pictures. Some hikers from the previous year were there and supplied some trail magic in the form of Beer.  Yum!  Since you are not supposed camp near here, though other people were, I hiked a few miles on and camped up the trail in this cool little spot with a fellow hiker.  It was down an incline, ( which was hard to get back up the next day, lol ) across a river, and on crushed rock that felt like sand.  It was far enough away from the trail that when some hikers passed by with their headlights, we couldn’t recognize who they were.  Perfect.