Hello everyone!  It’s been a busy 6 weeks since my last post.  I’ve really been absorbed with this amazing journey I’ve been on.  Long hiking mile days, record heat waves, broken gear with unforeseen time off trail, hail storms, bear sighting, etc.  If you are on Facebook with me you’ve been able to see some of this unfold, as I’ve tried to at least stay in some contact with you all in one way or another.  For those of you who are not, the last thing you saw was me walking the aqueduct. So without further ado…

In the next stretch of the walk after the aqueduct there are two rather large wind farms. Smart location!  It was so windy out!  The first one is super friendly to hikers. The signs are actually funny.  (The second wind farm is just blase. ) 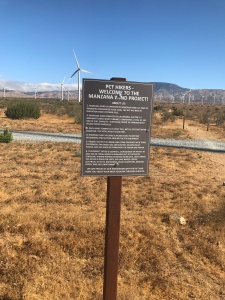 If you read the sign near the bottom, it says the office is open for visits and they have ‘random people’ there. Haha! And although I didn’t go to their maintenance office, apparently if you got there at lunch time they had full on BBQs! Ribs, and coleslaw and pasta salad, etc. or so I was told. Talk about office morale builders! They even had signs that warned the wind farm crew about where we cross and to be cautious. Hilarious! 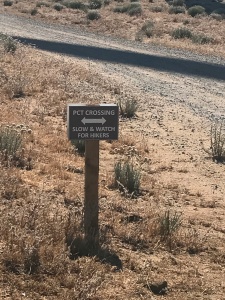 I will be uploading a video that shows how windy it really was there.  Wind Blows! (does any other movie geek get that reference?)

Well, continuing on from there, I happen to walk past a PCT registry log book, and on the outer metal case someone, and I don’t know who, wrote my Trail Name! I have my suspicions but never confirmed them. 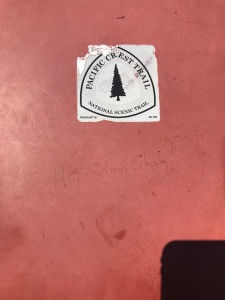 That night I camped at a trail magic spot that was tucked away in some bushes to alleviate the wind a bit.  It also had a pct log book, and the cover of it was made of hand crafted wood.  Pretty cool.  The next day I hiked on to the trail-head that intersected with the road into Tehachapi.  Got a ride into town and hit up the local German style bakery.  Rested up while having coffee and a scone.  Got a room at the Best Western and went about getting to the post office for my next re-supply box, a quick 1.5 mile walk, and hit up some fellow hikers who were also in town.  Made plans on having sushi that night at a place right next to the hotel with Caveman and Hotlips. We have been in a bubble with each other for the past 400+ miles now.  It was surprisingly delicious.  Retired early and planned a zero day the next day.  I had heard from some other hikers that they were zeroing there too because the wind gusts were reaching up to 90 miles and hour at higher elevations on the trail ahead.  Crazy!  That’s enough to blow you off trail!

My re-supply made me real happy this time, because this re-supply included my new Shoes!  My first pair were pretty beat up and had minimal tread left.  My feet had broken through the outer edges of both shoes too, so dirt and rocks could get in rather easy.  If you look closely you can see the rips.  They did their job though.

Caveman and Hotlips were going to take off the next day so we grabbed some grub at a local pizza place the night before.  I decided to take one more zero to really get ready for the desert and the climb out of Tehachapi in the wind and heat.  So on my second zero I grabbed any extra food I think I needed at the local grocery store and got ready for the hike out the next morning.

Got up, packed and got ready to go, with one small change to my pack… 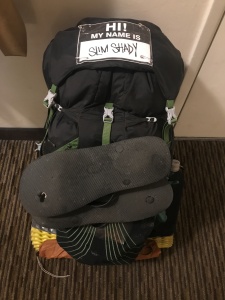 Hi My Name Is ‘Slim Shady’

My pack however was as heavy as it’s ever been.  4 liters of water and probably too much food. It will make for interesting hiking.