As I thought, my heavier pack, the wind and the heat all combined made for an interesting hike out of Tehachapi.  I did some last minute mailing out of the Post Office and a guy asked if I was a PCT hiker and needed a ride back to trail.  I of course said yes, got my stuff taken care of and jumped in his truck.  He dropped me off at the side of the highway next to the trail-head.  Talk about crazy desolate. 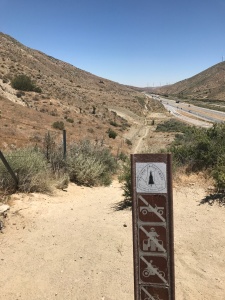 Well, I guess this Is the Mojave Desert.  It was a tough ascent out and the wind and heat did not help. Oh yeah, and that damn heavy pack!  I didn’t make it far before I called it quits and set my tent up tightly under a tree to get out of the wind.  I was not the only one around me with the same idea.  Other hikers were doing the same thing that night.  There were times on the trail this day, and some days after, that you would have to stop in your tracks and let the wind die down before moving on for fear of getting blown off trail.  I especially did it just before rounding corners because you could see the tress and bushes being blown around like crazy.

The next morning I caught a beautiful sunrise.  I got up early ( 5:30am ) to avoid some of the heat of the day and get some miles in. 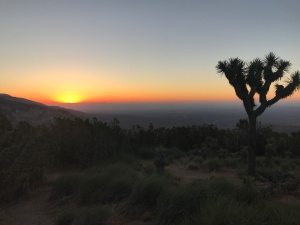 Who gets up this early?!

Not too many pictures were taken during this stretch.  It was just a lot of sand, poodle dog bush, heat, and desert plant life, with the occasional reprieve of water sources and that’s about it.  It was getting hotter each day. And as I came to find out it there was a record heat sweeping through the area.  I did reach mile 600 on this stretch.  It was also the same day that was insanely hot.  I thought I had packed the wrong food to eat for this stretch or that I was more fatigued than normal or that I wasn’t drinking enough water, etc.  I come to find out, after a particularly awful, hot, uphill climb to a water source on a dirt road that seemed to last forever, that it wasn’t just me.  Most of the other hikers felt the same or worse.  Some of them had used all their water and were dehydrated.  All of us hunkered down in the shade and rested through the rest of the day.  We all had lunch, traded food and tried to relax in the heat as best we could. No-one wanted to leave or even stand in then sun.  Some hikers decided to night hike that evening while others, like myself, decided to stay the night and leave early in the morning.

I got up early (ish) and moved on for the day.  At one point I made a quick video for Facebook, which I also updated on here on my Videos by Me page. ( check it out )  It was me wearing my bug head net and talking about the heat, how far I was (mile 610) and the bugs.  It was still really hot and  I pushed on to two water sources that day.  One was a piped spring where I took a lunch break during the heat of the day, and set up my tent in amidst the tree shade to nap.  The second was a water cache that was put out for us hikers.  Which is pictured below. 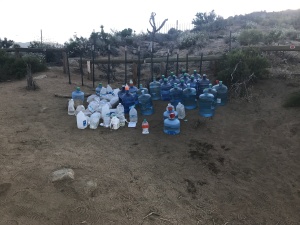 A water cache off the side of a dirt road that was sitting in the heat all day.  Yep, that water was HOT! So instead of me trying to gather some and wait for it to cool down I decided to camp next to it for the night.  I figured that in the morning it would be cooler and would be easier to drink, etc.

The ground was radiating so much heat still that it was actually hard to sleep, however the stars that night were the brightest I have ever seen… ever.  The Milky Way looked thick and very wide.  I got out of my tent just to stare at them for a time before getting tired and heading back to bed.   It was pretty amazing.

I hiked on in the morning after filling my water bottles with the much cooler water out of the cache.  Hotter and hotter the days got.  Took a break near a Joshua tree’s shade, where I made some texts and calls.  You know who you are who got ’em.  For what it’s worth the desert does have its beauty, and I saw a lot of it along this stretch.  At some point though, the sun and heat stopped me, so  I waited again until dusk to start hiking again.  Around 10 pm I got to about 5 miles away from the next water cache and stopped to rest.  I didn’t want to set up my tent so I ‘Cowboy Camped’ for the first time.  Cowboy camping is when you don’t set up your tent and just put down your ground cloth, sleeping mat, and maybe your sleeping bag to sleep.  Everything is left to the elements, etc.  I opted not to get my sleeping bag out because it was at the bottom of my pack, and I was just going to rest a few hours and get up before the sun and finish off the 5 miles to the water cache.  Stars were out, it got a bit chilly, and I fell asleep for the few hours I wanted.  Woke up around 4 am grabbed my headlamp, packed up and got ready to hike on.  When I slung my pack on something didn’t feel right… the strap on the left side had gotten chewed in several places by a critter at night. Crap! 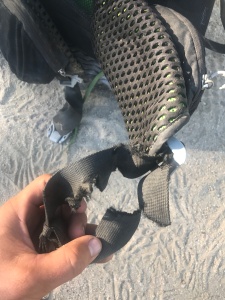 It was chewed almost all the way through in about 3 places, but somehow I still managed to put it on and tighten it up enough.  I did take it off right away beforehand though to check and see if it was chewed anywhere else, or if they got in my food. Nope, I guess that it just wanted the salt off the strap.  So I take off with my ‘busted’ pack, and don my headlamp to hike out in the early morning dawn.  As I get about 2 miles or so down the trail, my headlamp starts to fail.  Yeah.  I grab my extra batteries, and replace them… it continues to fail… now I have a ‘busted’ headlamp.  Ugh!  Luckily it was light enough to finish the hike to the next water cache at a place called Bird Spring Pass.  I arrived at around 6 am.  This water was situated under a large Joshua tree and most of it was in the shade, so as to not be too hot.  This cache also had some trail magic food, and a handful of external phone charger batteries with a solar powered charging station.  Grabbed a bite and charged up my phone.  Now, what to do about my busted gear?

2 thoughts on “Tarzan Couldn’t Take This Kind of Hot!”