Hiked out of Timberline in the late afternoon on Sunday. It was cold and wet. Although not as bad as the storm which came through Friday night which lasted until near morning. Lightning, thunder, heavy rain. While hiking on, I tried to find the same spot I set up camp two years ago, but to no avail. Camped down in a small field after only a handful of miles. It was near freezing over night. Had to layer up more than normal to keep warm.

The next day I was headed toward Ramona Falls, and on the way I had to cross a ‘hiker’ bridge. 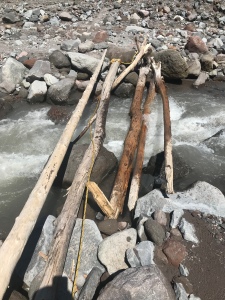 It was not as sketchy as it looks but I still didn’t want to get wet.

Ramona Falls was pretty, but it was overrun by day hikers and it lost some of its appeal to me. I did have a break and a bite while hanging out there tho and it made for a great backdrop. The area after the falls was pretty awesome. It was lush and green and almost fake looking.

A little less than an hour later I had to cross another ‘hiker’ bridge. This time it was a large tree, on top of another large tree about 10 feet above the water. My leg was long enough that I could use my foot to reach the log underneath to help shimmy, slowly, across.

This time the blue rope helped

When I camped that night I realized I only had about 30 miles to get to Cascade Locks which will finish up Oregon for me. So I decided to pull a 20+ mile day on Tuesday to put me at Cascade Locks in the early afternoon on Wednesday. I didn’t take but one break on Tuesday, but it was a cool break. It was at the shoreline of Lake Wahtum.

My 20 mile day on Tuesday finished up through some bad burned areas, which is the reason I had to skip it last time, due to the Columbia Gorge Fire. It was so devastating that one of the most popular alternative routes the PCT hikers take, The Eagle Creek Alt, is closed and I’ve heard there is no definitive timeline as to when it will be open again. It includes a walk behind waterfall and some of the most scenic views of the area. Instead of being able to go this way we are stuck walking thru the burned area on the PCT trail. 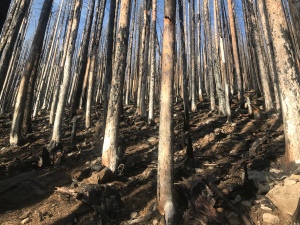 This pic does not do it justice

My day on Wednesday only consisted of a little over ten miles to finish Oregon. I ate a big breakfast to get rid of food I wouldn’t need and to lighten my pack a bit. The trail was relatively easy. Some of it was littered with rocks which made for slow going at certain times. The views, however, never really stopped impressing.

I got to Cascade Locks and The Bridge of the Gods by 1pm. Right when I figured I would. Oregon has been finished!

(See my supplemental post about The Bridge of the Gods.)