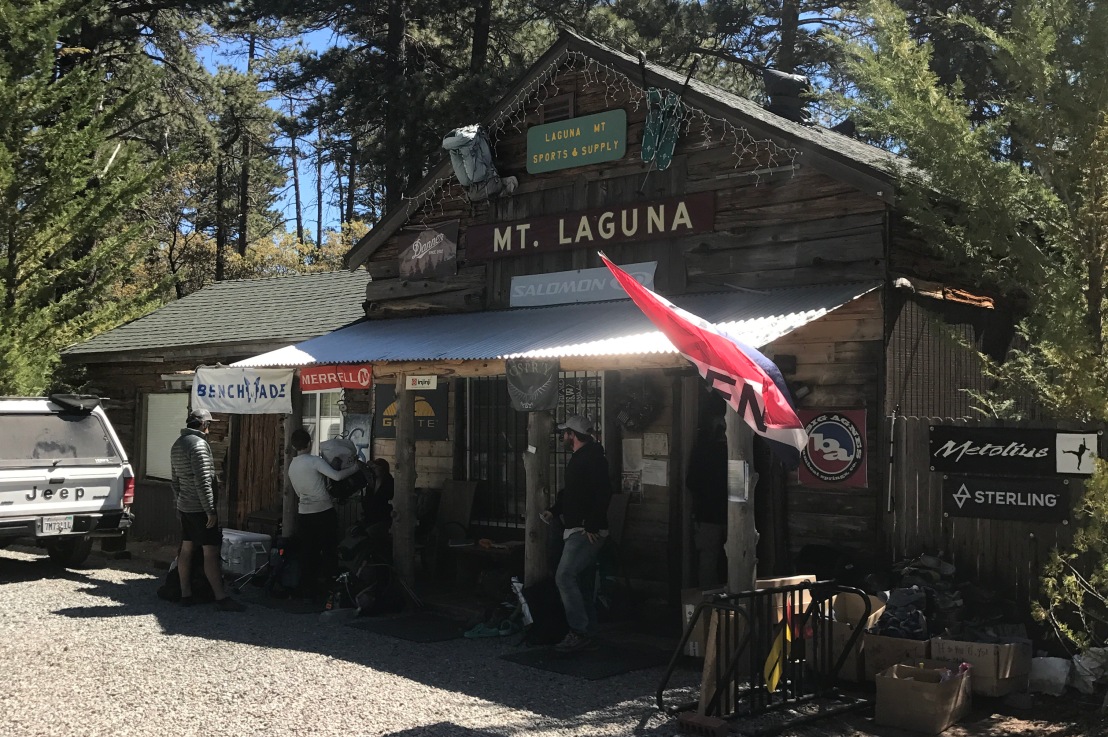 Ok, so it’s more like a week, but time is flying out here! The days have already started to blend together. I keep meeting awesome people. So many I won’t see again because I’m taking it easy in the beginning. So easy that I have only planned hiking 8 miles a day for the first two weeks. Also, so easy that I chose to take a ‘zero day’ after reaching Mt Laguna. A ‘zero day’ is when you don’t hike any miles during that day. The picture you see is the outfitters at Mt Laguna. And totally randomly (I had no idea you two were in the picture, guys!) I caught a couple of buds, Amnesia and Doc getting a shakedown. What is a shakedown you ask? Well it’s when you give your pack, minus food and water, to the guys at the outfitter and they weigh it to see what your base weight is. Then they go through your stuff and recommend ways to reduce that weight even further. I did not go through that, however as I write this I had just finished doing a personal shakedown. I’ve dumped a lot of stuff.

So during my zero I had lunch at the local restaurant, met some cool people who I still see on the trail, shopped for different food, picked up my first supply box, and rested my legs. Also keep meeting people from around the world! Israel, Scotland, Japan, Mexico. The states are getting filled up too. Nebraska, New York, Arkansas, etc. I think I’ll meet someone from each state by the time I’m done. When I was done for lunch I was waiting for some other hikers to go to the USPS with when I couple and their friend stopped and chatted with me. They were catching the sites and passing through. We chatted about what I was doing and some details about it. Super nice people!  They wished me luck and went along their way. (And if you’re reading this guys, I want you to know, little encouraging chats like that keep me/us going during those difficult miles! So, thank you!)

So after my zero day and a big breakfast I felt great and did some decent mileage, for me. Longer than I wanted/expected but my campsite was amazing! It was amongst a boulder field. Had dinner watching the sun go down over the boulders. I’ll load a picture in the gallery of it. Also, around mile 45 I walked around a bend in the trail and the most amazing view hit me square in the face. And of course a picture doesn’t do it justice but here it is anyway…

I stood staring at it for such a long time. It was super windy and spectacular!

On the next morning after camping amongst the boulders I hit my second trail magic of the trip. It was at a place called Sunrise Trailhead. A guy named Tom posts himself up there and gives out coffee, breakfast burritos, sodas, beers, danish and great company! Hung out there for a couple hours before heading on to my next stop. Which was devoid of water… walking in the desert with only the water on your back can be a very humbling experience.

And I’ll leave you with that for now.  More later, of course!